Fundamental questions in biology include: How do complex traits, such as eyes, evolve through changes in their underlying sub-components? What are the transitional steps in function that link simple structures to those that are more complex? For eyes, we can address these question using an integrative approach because light-interacting structures tend to have molecular components that are well-described and deeply conserved. Further, explicit predictions link new light-interacting structures to new light-influenced behaviors. Thus, we may be able to predict changes in behavior from changes in genotype. However, there is still no explanation of eye origins that fully integrates structure, function, and genetics. To address this short-coming, we are studying relationships between light-interacting structures, light-influenced behaviors, and gene expression in chitons. In the near future, we hope to apply a similar approach to studying the origin and evolution of other complex traits in mollusks, including jet-propelled swimming in scallops and metal-coated radula teeth in chitons. Techniques we employ for these studies include: 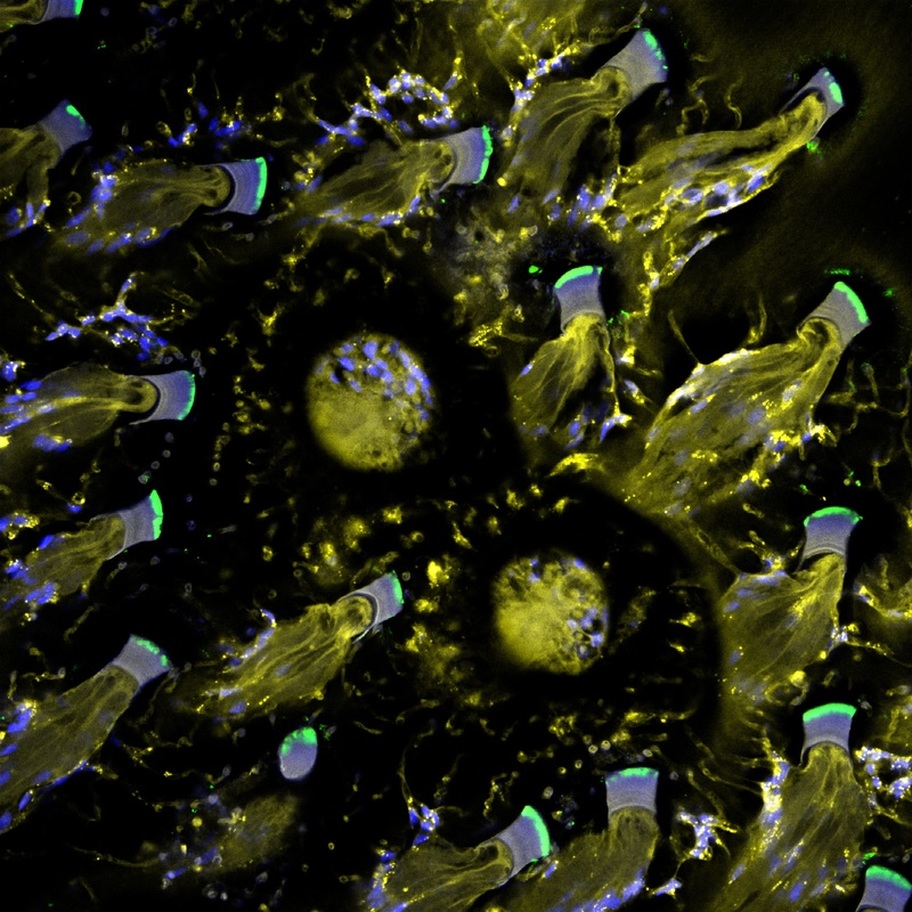 How and why did shell-eyes evolve in chitons?
Amid the wide diversity of eyes found in different animals, the shell-eyes of chitons (Mollusca: Polyplacophora) may be the most unusual of all. Most chitons lack eyes as adults, but certain species have hundreds to thousands of tiny (< 100 micron), image-forming eyes embedded in their protective shell plates. These are the first eyes known to form images using lenses made of the mineral aragonite (CaCO3). Questions we are asking about these eye include: What are the functional advantages and/or constraints associated with lenses made of shell? Why do most species of chiton lack eyes? What are the genetic components of these eyes and what were the genetic changes associated with their origin? To what degree do the nervous systems of chitons integrate information collected separately by their hundreds of eyes?

All chitons have sensory organs called aesthetes embedded in their shell plates. Aesthetes come in a variety of forms and many of these forms appear to be light-sensitive. Some aesthetes contain non-pigmented light-sensitive cells, while others are modified to form eyespots or eyes with image-forming lenses. In the confocal image above, two shell-eyes are evident thanks to the rings of dark pigment surrounding their retinas. The smaller, more numerous structures in the image are aesthetes expressing r-opsin (labeled in green). Beyond having interesting eyes, chitons are nice to work with because they display multiple light-influenced behaviors that are simple, stereotyped, and easily-manipulated. To learn how and why eyes evolved in chitons, the Speiser Lab is using an integrative approach to study: