The groups of mollusks that we study contain species with nervous systems that vary widely in their complexity and degree of centralization. We are using comparative approaches to study how and why complex, centralized nervous systems evolve from those that are simpler and more dispersed. In particular, we are interested in the co-evolutionary relationships between brains, new sensory systems, and new forms of locomotion. We are also using scallops and chitons as model systems for studying the neurobiology of dispersed visual systems. Techniques we employ for these studies include: 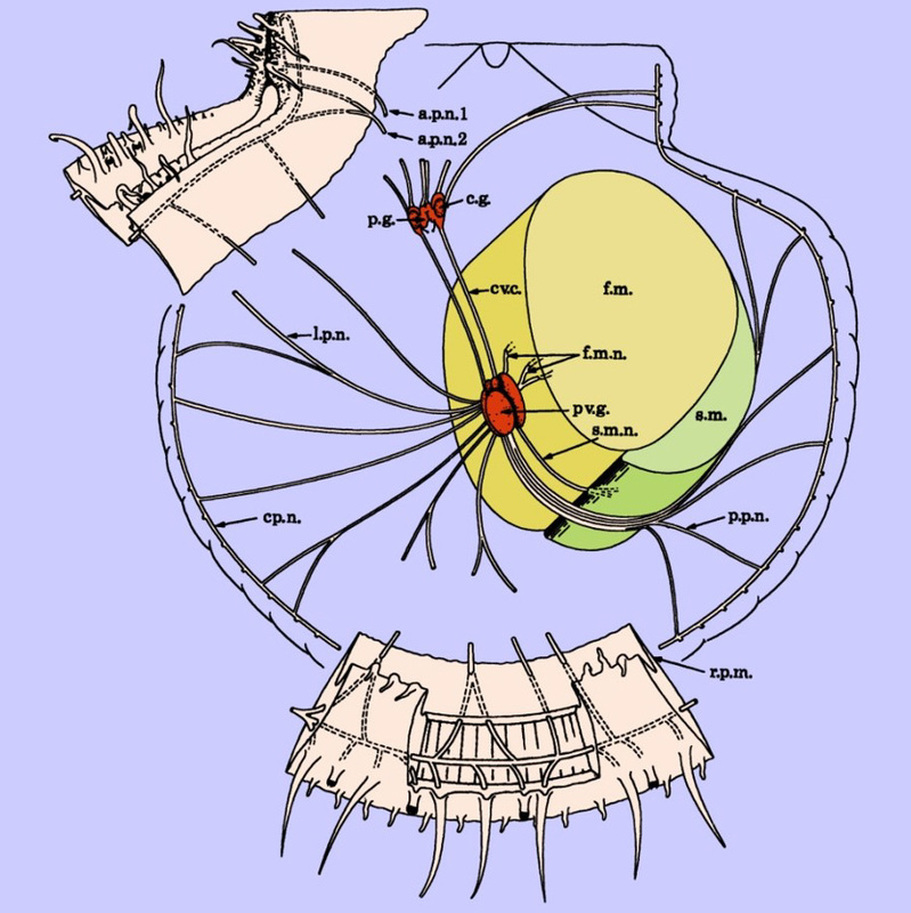 Co-evolution of eyes and brains
Bivalves and chitons tend to have decentralized nervous systems. Unlike other bivalves, scallops have a large central ganglion  known as the parietovisceral ganglion (PVG). Previous work indicates that this ganglion includes specialized lobes that process visual information gathered by the eyes. The diagram above illustrates the nervous system of the scallop Pecten ziczac (diagram modified from Wilkens, L.A., 1981. Neurobiology of the scallop. Proc. R. Soc. Lond. B. 211, 341-372).
Neurobiology of dispersed visual systems
Most research on the processing of visual information has been conducted on animals that have a pair of eyes located on their head. Generally, information gathered separately by the right and left eyes is transmitted along a pair of optic nerves that travel to a central location within an animal’s brain. Here, information from the two eyes is integrated so that a single reconstruction of the visual environment is formed. Such integration is necessary if an animal is to accurately gauge the number and relative positions of objects in its environment. Paired cephalic eyes are not the only eyes found in the natural world, however, and we may have much to learn from visual systems -- such as those of scallops and chitons -- that deviate from this familiar arrangement by containing dozens or hundreds of separate image-forming structures. Currently, the Speiser Lab is asking: